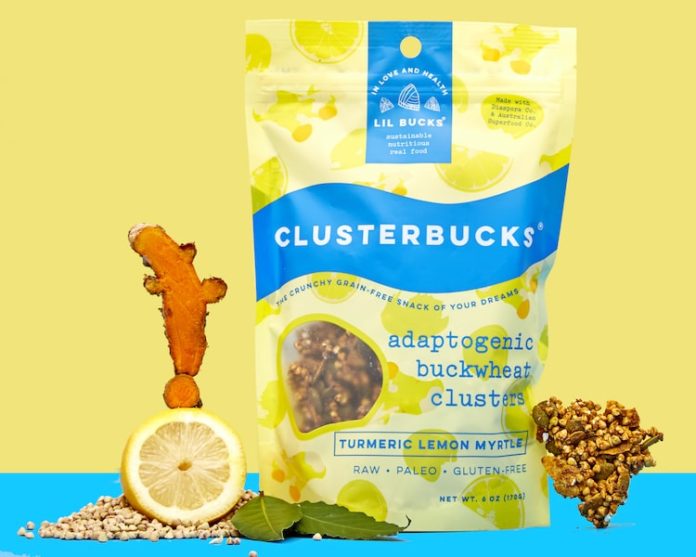 Get ready to find your next favorite superfood, inspired by Australian trends. Lil Bucks is the first sprouted buckwheat brand to land in the United States. Emily Griffith launched Lil Bucks in 2018 soon after she had a life-changing açaí bowl in the land down under.

“I was living in Sydney, Australia at the time, and had this life-changing açaí bowl by the beach where I lived,” explains Griffith. “Normally, they would put fruit and granola on the bowl. This time, they put sprouted buckwheat on top instead. I instantly fell in love with the crunch, I am a big texture person. I also felt amazing after eating them. When I moved back to the US, I realized there were no brands in the US promoting sprouted buckwheat.”

The versatility is extraordinary. “You can put it on ice cream, salad, avocado toast, scrambled eggs, sweet potatoes, smoothies, and more,” says Griffith.

You can incorporate Lil Bucks into every meal of the day: breakfast, lunch, and dinner.

“A typical breakfast consists of a smoothie, which is a great way to get a lot of nutrients in,” says Griffith. “I will add the Cacao Lil Bucks to a berry smoothie. One of my favorites, Lil Bucks energy balls. Lunch is avocado toast. Dinner might be kale salad with crumbled Turmeric Lemon Clusterbucks. I make the salad with olive oil, lemon, and kale. I will even put the Clusterbucks on curry. The Lemon Turmeric Clusterbucks are newly launched and have a little sweetness mixed with spiciness. For dessert, I love plant based ice cream with the Chocolate Reishi Clusterbucks.”

The sprouted buckwheat seeds are also gluten-free, grain-free, low in sugar, vegan and paleo & has ten times more antioxidants than quinoa. With 5g of fiber and 6g of plant-based protein. And remember, Lil Bucks are a fruit seed, rather than a grain!

A Recipe to Make Now

There is so much that can be done with buckwheat as you may have just learned. One recipe that is a favorite of Emily’s is her Lil Bucks Energy Balls. “They are similar to protein balls,” explains Griffith. “Instead of just dates or oats, they use the Original Lil Bucks. The energy balls have lots of crunch and it is great to enjoy before a workout.”

“New York is the number one buckwheat crop capital in the country.”

Did you know most buckwheat in the US comes from China? Instead of importing foreign buckwheat, Lil Bucks encourages more farmers to grow it within their crop rotation. “New York is the number one buckwheat crop capital in the country. The buckwheat is [mainly] grown in the Finger Lakes region. Our buckwheat comes from Minnesota.”

Lil Bucks recently launched in Whole Foods in the Midwest region. They are also sold at several grocery stores in and around Chicago. You can also find them on Amazon Prime and on their website. On their website, receive free shipping over $40.

How to Start a Profitable Business in New York

Where to Find the Best Lobster Rolls Across Connecticut

East End Taste Magazine is your source for culinary-focused sustainable travel, and food and beverage focused coverage of the Hamptons and North Fork of Long Island. We also cover specialty food, events, fashion, lifestyle, and wellness.