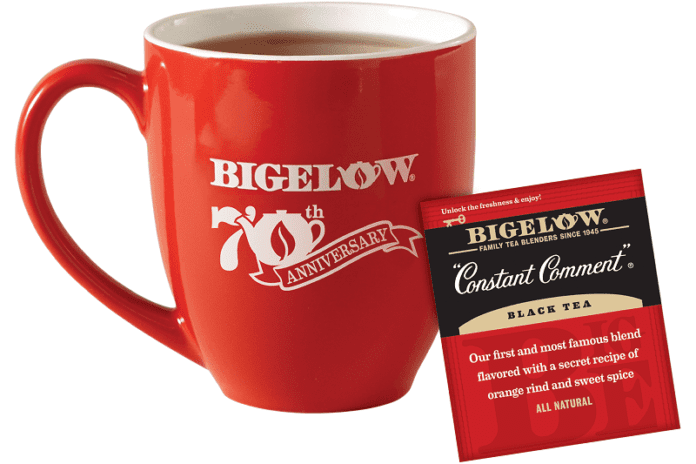 Tea aficionados gathered in the Farioly Program Room at Danbury Library in Danbury, CT on January 14th to celebrate National Hot Tea Month with an informative seminar. Sponsored by Bigelow Tea of Fairfield, the #1 specialty tea provider in the U.S., and presented by Betty Johnson, “The History and Health Benefits of Tea” summarized hundreds of years of rich history and decades of health-related research on one of the world’s most popular beverages. Guests were treated to an informative presentation and sent home with over 20 samples of delicious Bigelow Tea.

The History of Tea

Tea is approximately 5,000 years old. A popular origin story of tea handed down throughout generations describes the discovery of tea as a happy accident. As the story goes, one day a Chinese Emperor was drinking boiled water under a tea bush. A leaf happened to fall into the boiled water, releasing aromatic essential oils and creating an unforgettable experience. Tea became popularized in China, Japan, and eventually all over the globe. By the 1600s, tea had become popular with European royalty. Dutch and Portuguese merchants brought tea from China to the U.K. where it was sold for $100 per pound. Initially, all tea was loose. Salespeople began transporting tea to customers in small silk pouches which the customers would then steep in their cups, giving rise to the popularity of tea sachets. Tea sachets as we know them today were invented by a gentleman in Newtown, CT.  Tea started as a treat for royalty but eventually became popular with the working class as well. By 1773 tea had become popular in the U.S.

There are four types of true tea, Black tea, green tea, oolong tea, and white tea all of which are produced by harvesting the top two leaves and bud only of the camelia sinensis plant. The differences in taste are due to how these teas are processed. Black tea is dried and fermented longer than any other tea before being crushed and heated. Oolong is made in much the same way, but with a shorter fermentation process. Green tea leaves are steamed and scalded but not fermented. White tea is the least processed. It is picked and air-dried only.

The good news is, no matter what type of tea you choose there are ample health benefits in enjoying your favorite cup. Tea is rich in phytochemicals, especially specific flavonoids called catechins which offer antioxidant properties that may help fight free-radicals.EGCG, the most abundant catechin in tea has recently received a lot of positive scientific attention. In healthy individuals, EGCG can help promote blood flow and increase the chance of surviving a stroke or heart attack.

“Tea is reported to improve brain health, guard against insulin resistance, certain types of cancer, and improve muscle endurance and bone strength in conjunction with exercise.”

A recent Harvard study also noted the benefits of another compound found in tea-L-Theanine, which may help stave off viruses and bacteria. In the study, tea drinkers were five times less likely to catch a cold or flu than their coffee drinking counterparts. Another study suggests gargling black tea for 30 seconds to avoid the flu. Tea is also reported to improve brain health, guard against insulin resistance, certain types of cancer, and improve muscle endurance and bone strength in conjunction with exercise. A more immediate benefit of tea is energy and focus without jitters or a crash thanks to the synergistic effect of caffeine and L-Theanine.

Global Wellness Day Inspiration from Luxury Hotels Around the World

ABOUT US
East End Taste Magazine is your source for all things food and drink in the Hamptons and North Fork, and culinary-focused travel. We also cover specialty food, events, fashion, beauty, lifestyle, and wellness.
Contact us: asst@eastendtaste.com
FOLLOW US
© Copyright 2020 - East End Taste Magazine LLC