Home Travel Europe The Prettiest Towns and Villages in the Algarve 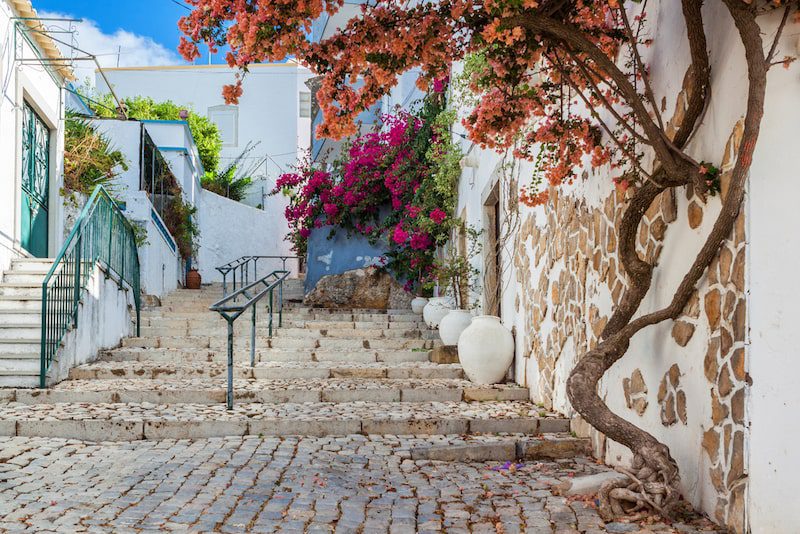 Well known for its golden beaches and tourist resorts like Albufeira, the Algarve, Portugal’s long southern coastline region, has much to offer visitors who want to explore a little further. This is an area filled with history, heritage and incredible landscapes from rocky coasts, pristine beaches, impressive mountains and deep, fast flowing rivers waiting to be discovered. Below we take you through some of the prettiest towns across the Algarve, including what to see and do in each destination. 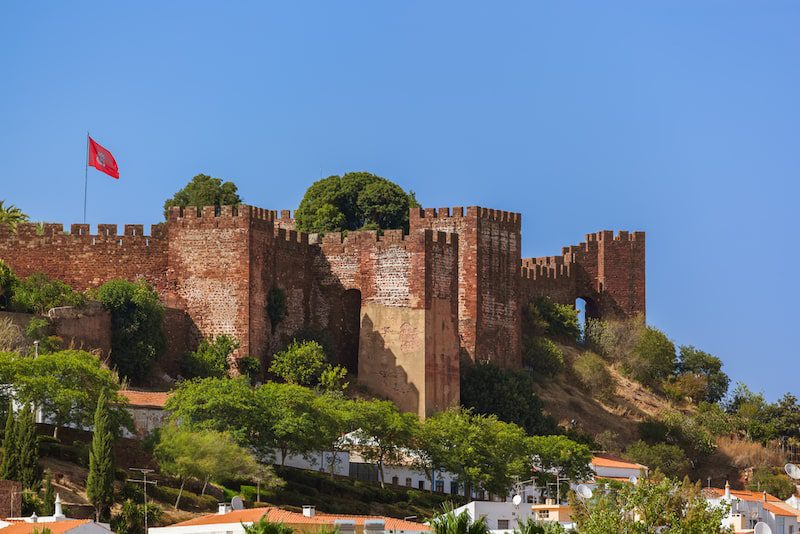 Head north to discover the pretty rural town of Silves. Initially built by the Moors, it was conquered in 1189 with the help of Danish crusaders. For several centuries, it was the capital of the Algarve. Explore the narrow streets, filled with whitewashed houses, and the imposing polygon shaped castle offering fantastic views from its ramparts. The Hotel Colina Dos Mours is housed in a former Arab castle and has an excellent restaurant.

Not far away from Silves is the little town of Algoz dating back to the Moslem era. Explore the historic sites of the Emida de Nossa Senhora do Pilar, the Igreja Matriz and the Ålpeadeiro de Algoz. It is also a great place for shopping – foodie treats include wine, almonds, figs, olive oil and citrus fruits. People come from far and wide to search out bargains in the town’s long established flea market. Try restaurants like Sobretempero and O Foral specialising in local Algarvian food.

Tucked away in the mountains of Algarve, 29 km from Silves, the little village of Monchique has been attracting visitors since Roman times. Kings and queens have been drawn here by the presence of medicinal spa waters that can still be tried today. Segway tours further into the mountains offer a fantastic way to explore the spectacular scenery. Try the A Charrete or Luar da Foia restaurants while the Monchique Resort & Spa is a good hotel option. 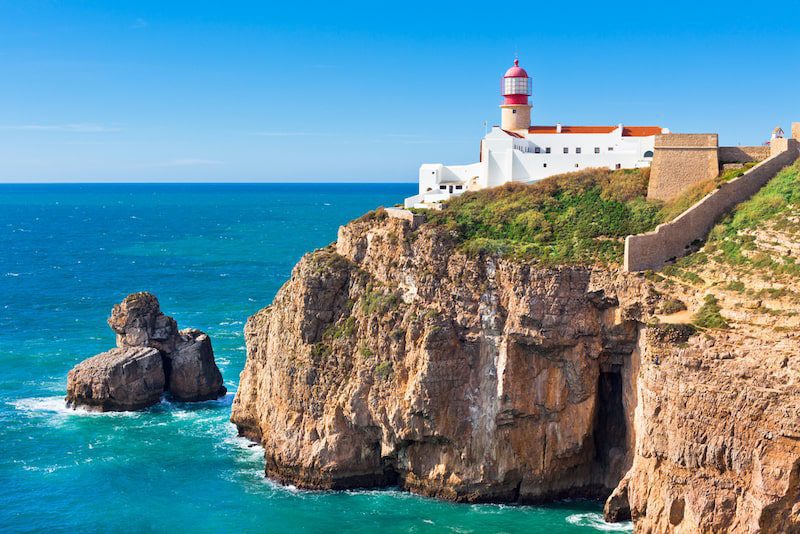 Down on the southwest coast, Sagres gives the feeling you have reached the end of the world. Rugged cliffs, little vegetation and wild winds mark the site chosen by Infante Henrique in the early sixteenth century as the home of his nautical school to train Portuguese explorers crossing unknown seas. The port was often attacked by corsairs resulting in the creation of the massive Sagres Fortress located across the promontory. It’s also a great location for surfing. Worth considering is the Memmo Baleeira Hotel or the Pousada Sagres with sweeping ocean views while Restaurante A Sereia is good for seafood.

Out on the southern coast is Carvoeiro, a picturesque resort town. Its Praia da Marinha is said to be one of the world’s finest beaches and is a perfect location for visitors wanting outdoor activities. Hike through the Sete Vales, explore the Algar Seco cliffs and kayak over to the Benagil Caves and stop off at the Mar d’Fora for seafood. Try the Tivoli Carvoeira Algarve Resort or the Hotel Mirachora Praia.

Another pretty coastal village nearby is the fishing village of Ferragudo. This beautiful village also offers access to the Bengil caves as well as boat trips to search for dolphins. Ferragudo has been known for its fishing expertise ever since Phoenician times, since the mouth of the River Arade is well stocked with fish of all kinds. 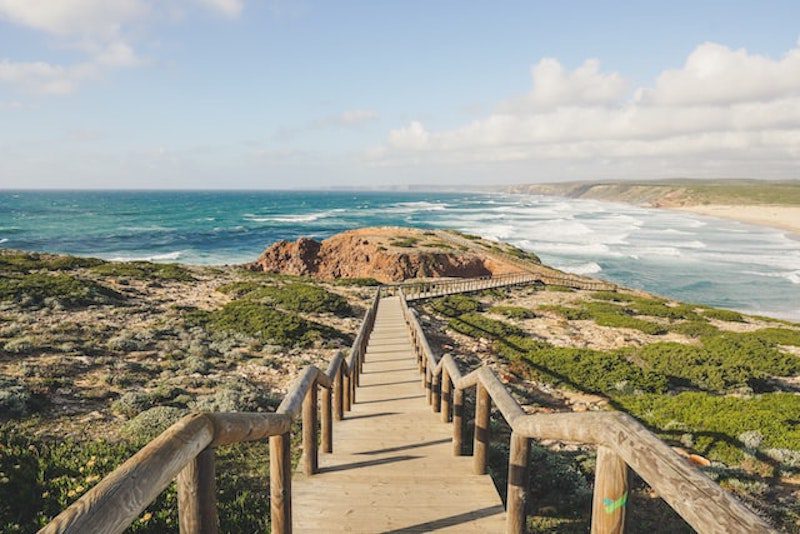 Bordeira is another very beautiful coastal town, surrounded by white sand and translucent waters. Located on the Costa Vincentina, 26 km from Sagres, the current town dates back to the mid fifteenth century when the Bishop of Silves ordered a church to be built on the site. Archaeology has shown that people have actually been living here much longer that that since Palaeolithic finds have been discovered. Worth trying is the O Sito do Rio restaurant not far from the beach. Most hotels are close to the beach, and the Praia do Canal Nature Resort has its own spa.

The powerful Guadiana River marks the boundary between Portugal and Spain. People have been living here since Phoenician times, attracted by the valuable resources of the area. The little town of Castro Marim is built around a massive protective fortress and is surrounded by beautiful salt flats producing highly prized sea salt.

Not far away is Tavira, a coastal town beside the Gilao River within the Ria Formosa National Park. Wildlife abounds here especially flamingos and spoonbills. Colourful houses painted in pretty blues, yellows, pinks – check out the rooftops since almost every house in the Algarve has a different ornamental chimney design!

Visit the medieval Santa Maria do Castelo with its Crusader tombs, and the anchor cemetery at Praia do Barril. Well supplied with hotels, Tavira’s Hotel Villa Gale is a popular option offering good access throughout the region. Try the tapas at Ti Maria on the R. dos Fumeiros or the Mediterranean cuisine at Tasquinha da Paula on Lagos dos Martires da Republica. 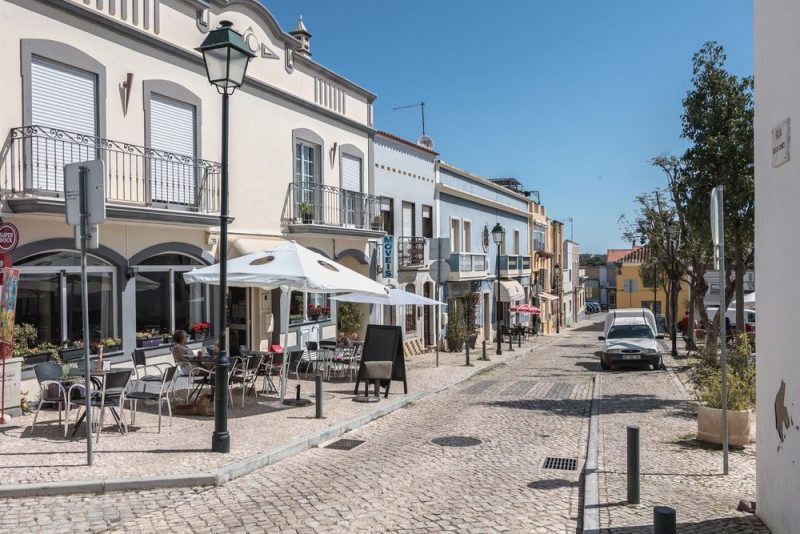 Head inland a little way from Tavira to explore the pretty town of Moncarapacho sited among gentle hills. First mentioned in royal documents in the fourteenth century, this is a very fertile area where fig trees, almonds and pomegranates provide excellent harvests. It’s a very picturesque little town complete with flower bedecked streets, and flower garlands strung across walkways. Take a stroll up the 411 metre high Cero de Sao Miguel for some fantastic panoramic view across the Algarve. The pretty whitewashed Octant Vila Monte hotel offers a relaxing garden retreat and an excellent restaurant.

While in the Tavira area, search out the little village of Cachapo situated between the mountains and the valleys. All the buildings are built from shale and the town’s museum has some lovely displays relating to the area’s culture and customs. A great place to buy the local food specialities – sausages and fresh honey. Very rural and non-touristy, it is best regarded as a day out excursion from Tavira.

This pretty town in the Algarve is 11km from the airport town of Faro, and is a beautiful and serene place to relax and drift. Explore the pretty streets and visit the Roman ruins of Milreu. Don’t miss the Palace of Estoi which was built in the nineteenth century. Now a guesthouse and one fo the Small Luxury Hotels of the World, it has a vast array of stucco panelled rooms, painted ceilings and a pretty blue & white tiled exterior leading out into the gardens. Located in the palace’s old kitchen, the restaurant even has the original stove and chimney adorned with restored tiles.