With its densely wooded forests and a plethora of state parks and preserves, Connecticut is one of the best places in New England to view fall foliage. While there is no shortage of superb vantage points to witness nature’s transformation this fall, the following five locations in CT are among the most stunning.

We have also included a list of fast facts that include when to visit for peek foliage season and other useful pieces of information.

In the far north of the Northwest hills of Connecticut, you will find People’s State Forest, a 3,000 acre preserve along the Farmington River with trails for hiking, fishing, hunting, and wildlife preservation. Overall, People’s State Forest offers approximately 10 miles of hiking trails with gorgeous views year-round.

Two trails, in particular, will offer a prime view of the autumn’s colors: Chaugham’s Lookout and the Grand Vista. The Grand Vista view is accessible by car via Warner Road. Or for the more intrepid, take the steep 1.3 mile Jessie Gerard Trail to access the view. 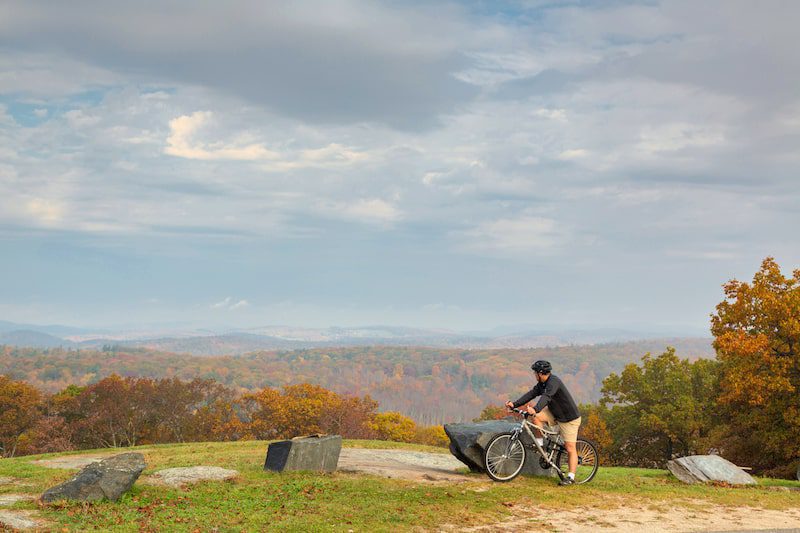 Mohawk State Forest encompasses over 4,000 acres (1,600 ha) in the towns of Cornwall, Goshen, and Litchfield in the southern Berkshires of Litchfield County, Connecticut. This park offers several stunning vantage points to view the foliage. Cunningham Tower, a stone tower in the northern section of the forest offers a great view as does the 1,652 ft elevation Red Mountain, which is accessible via the Mohawk Trail. Perhaps the prettiest vistas can be accessed at the peak of Mohawk Mountain, the 1683 foot summit on the blue-blazed Mattatuck Trail.

Mt. Tom State Park features a lake for swimming and boating during the summer, ample places for picnicking, and for leaf-peeping, a stone tower of 1,325 feet in elevation at the end of a moderate one mile trail. The park is among the oldest in Connecticut having been commissioned in 1913 by the state’s Park Commission.

Shenipsit State Forest’s 6,126 acres and over 30 miles of trails are composed of 11 parcels spread over 7,000 acres in the towns of Stafford, Somers, Ellington in Northeastern Connecticut.

This beloved state forest is also the location of the Civilian Conservation Corps (CCC) museum which chronicles the program of government-funded environmental conservation work for unemployed young men during the Great Depression until 1941.

The preserve features an observation tower at the top of Soapstone Mountain which can be accessed by a short .25 mile walk from the main parking area or a 1.3 mile hike from the Shenipsit Trail.

Waramaug’s Rock within the Macricostas Preserve provides a stunning panoramic view of Lake Waramaug atop a 1,250 feet summit. Waramaug’s Rock is part of the sprawling 998 acre Steep Rock Preserve network.

There are three separate parcels with over 40 miles of recreational trails. This difficult 1.69 mile hike along the yellow trail marker from the main parking lot is well worth the view.

Waramaug’s rock is also the subject of several local mysteries, including a triangle of large rocks pointing north (thought to be the relics of early mapmakers from Yale) and Hebrew inscriptions thought to date from the mid-1700s.

Most Beautiful Towns in Virginia

The Perfect Day Trip to Temecula Valley in California