Kissaki is making their mark in the out east! O by Kissaki opened in the Hamptons this past summer at the former Bamboo and Zokkon space on Montauk Highway in East Hampton. This sushi and crudo hotspot joins their sister restaurant in the Hamptons, Kissaki, located in Water Mill.

The name O by Kissaki represents the curve on top of the Japanese Gyuto knife. It is the strongest and sturdiest part of the knife. It also represents a focus on hot dishes for the menu concept, particularly fish. 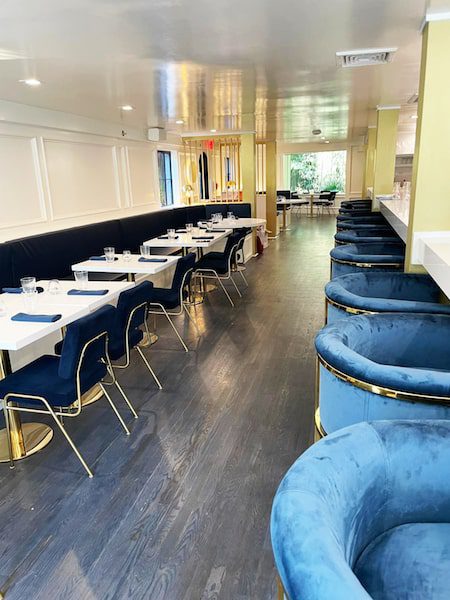 O by Kissaki offers high-quality sushi-grade fish alongside raw crudo, and hot robata grilled items. Guests will notice that each dish is crafted so as not to waste the fish. The restaurant only serves a limited quantity of certain dishes each evening. An example is the Togarashi Fillet with sweet potato gratin.

The menu at O by Kissaki includes a variety of both raw and cooked fish throughout the menu. Restaurant guests will discover traditional and specialty Maki, a raw bar, and Chef Mark’s specialty nigiri.

A top choice is the Steelhead Trout in a fish marinade with citrus egg sauce and Ohba oil; Chicken Tsukune or Japanese chicken meatballs with curry aioli and chives; and the Whole Lobster Tail with sweet miso butter, and Togarashi threads.

The O by Kissaki drink menu is filled with Japanese-inspired cocktails, Blue Door draft sake in addition to a large selection of wine and beer.

Whisky, Meron, Ichigo, Ikigai, and Omugi highballs are on the menu. Craft cocktails including an Oolong Martini, Kosho Margarita, Momo Sour, and a Sawayaka Daiquiri.

A popular choice is their frozen watermelon cocktail called Samuhamu. It is made with Absolut Watermelon, shochu and Lilliet Rose. The frozen Mutsu Colada is also an excellent choice.

Desserts at O by Kissaki

Kissaki’s best kept secret might be their dessert selection! At O by Kissaki, taste Beard Papa’s famous cream puffs. The cream puffs made with two layers of puff-choux on the inside, and pie crust on the outside. Choose the Oreo with Vanilla Custard Cream Puff: a light treat with a touch of decadence for a sweet ending.

Executive Chef and Partner Mark Garcia started his journey into sushi-making with a decade-long mentorship with Chef Kaze Chan of Sushi-san. Chef Chan has a 30-year history of opening innovative and wildly successful sushi restaurants. These include the Heat, Mirai Sushi, Kaze Sushi and Macku Sushi.

Mark has worked in numerous restaurant and hotel kitchens over his career including the Waldorf Astoria and The Wit and J.W. Marriott Chicago. In 2014, Chef Mark was able to rejoin Chef Kaze and Michelin-starred Chef Jeff Ramsey to collaborate and subsequently develop the menu and design for the sushi bar in Momotaro. Before joining Kissaki, in 2016, Mark debuted his modern omakase at Gaijin in Astoria, Queens.

O by Kissaki in East Hampton is currently open for dinner Wednesday-Sunday beginning at 6pm.

Kissaki has locations in NoHo, the Upper West Side, Long Island City, Water Mill and Greenwich, CT. This is in addition to opening summer pop ups in Montauk, and on the Gansevoort Rooftop.

Owner Garry Kanfer spearheaded Kissaki’s overnight transformation to a rapid production take-out model, along with the expansion of several new restaurants and pop ups in the past year alone.

O by Kissaki is due to debut in the Wynwood neighborhood of Miami next year.

Private Dining in the Hamptons and on the North Fork